In August, we programmed most of the new Rokknor (Dwarf) abilities and bot units that we concepted in July; we spent some time studying some of our favorite retro games, which inspired new art assets that we’re very pleased with; and we extended some of the existing player mechanics. Throw in a bunch of updates to our engine, some visual FX, our first special enemy encounter (warrior), and new music from goat to top it off.

After concepting more Rokknor abilities and the bot units, Chris and Jeff were eager to prototype them and see them in action. We covered the Crawler Bot, Flier Bot, and Engineer in the last update, and now we can talk about the Digger, Sentry, Repair Bot, Warrior, Geomancer, and Scout. (FYI, most of the gameplay images below contain programmer art based on assets that Josh created.)

The Digger Bot is a Dwarven excavation tool, adept at maneuvering and tunneling tough terrain. One might find this little guy searching for gems hidden just under the surface. When not scrounging for gems, he’s a hoppy little pest.

An excellent mine defender, the sentry is routinely placed at the edges of excavation sites to alert and defend against the hazardous entities often encountered on the surface of Eblon. If tampered with, these aggressive drones will not hesitate in their reaction.

The Repair Bot is a variant of the Sentry Bot that repairs Rokknor units and is dispatched to perform emergency repairs on the Salvager. 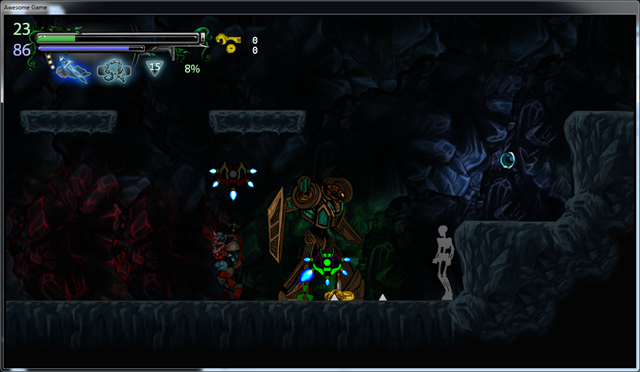 Repair Bot (green) performing an emergency repair on a Salvager who’s about to explode.

The Rokknor Warrior is an honor-bound and skilled fighter. The lack of alloy has forced the Rokknor kin to modify their gear to be easily transferable in battle. With the right forge masters, the alloy can be a flexible gear-grafter.

The warrior gained several upgrades in the last pass. He’s a lot more fun to play, and we still have yet to balance his abilities and distribute them to various warrior subclasses:

* Arched Hammer Toss – A ranged projectile thrown at near, medium, and far ranges.

* Shield Bash – A powerful move that leaves the player dizzy.

* Uppercut – The Rokknor may not be tall relative to the player’s jump height, but that doesn’t mean you can pass so easily.

* Rally Additional Forces – Some warriors have the ability to summon their brethren to battle.

* Block – Once out, the warrior’s shield can block the player’s slicing attacks. 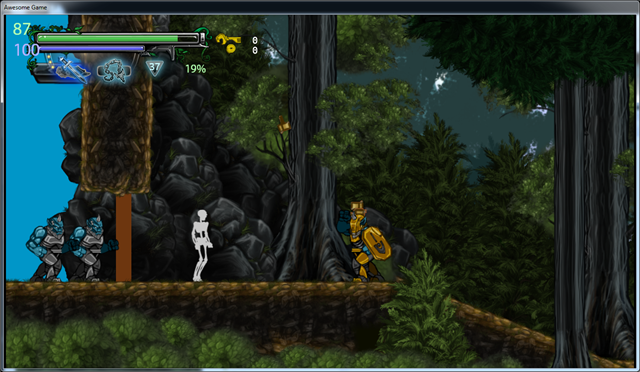 The Geomancer Rokknor are masters of their environment and use substantive Mana Shards found on the world of Eblon to cast dangerous spells.

About to be worked over by the doom spell and fireball (both placeholder assets).

* Fireball Seeker – A fireball that seeks on the player.

* Doom Spell – An extremely deadly spell that threatens the player’s life unless she can dispatch the Geomancer before the spell collapses in on her.

* Gem Suck – The Geomancer can pull gems from the area to fuel his spells.

Aside from the Geomancers, who have been tasked to find adequate adaptations from the environment of Eblon, the Rokknor abhor the common resources of the world. Wood, stone, basic metals are far inferior to advanced alloys the Rokknor are used to working with, so it is up to the Scouts to seek out salvageable alloy.

* Mine drop and bot drop – The Scouts can lay mines and bot balls that open into bots.

* Ram – Sometimes the scouts will crouch down to charge up to ram into the player. 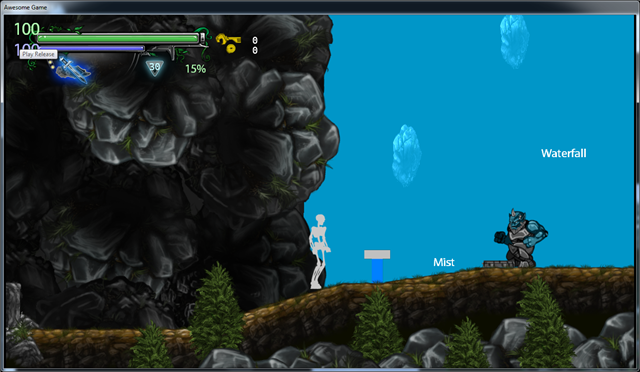 Josh has been touching up the animations for the tainted heads we first showed you a few months ago. 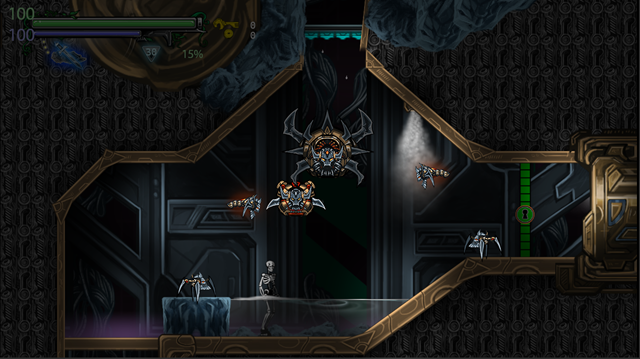 An assortment of evil.

While Chris took some vacation time, Josh and Jeff studied some retro environments to see what they could learn from it and use it as a source of inspiration to create some new assets. Here are some of the assets that Josh produced: 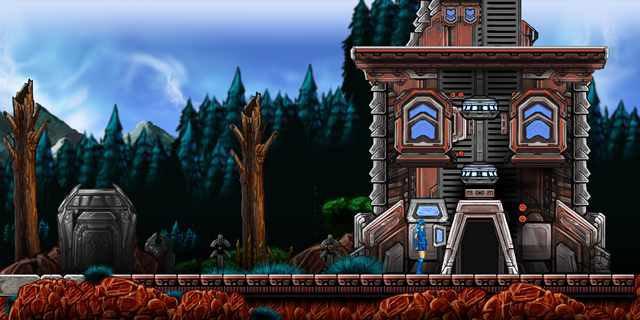 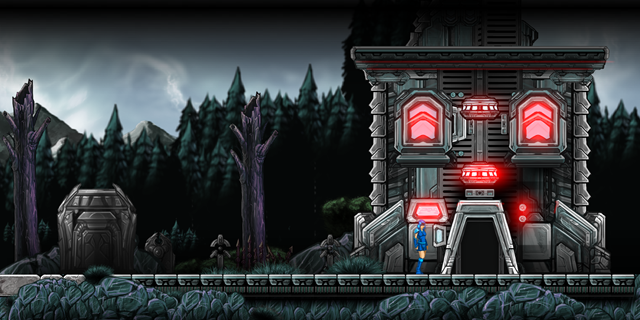 We can create different buildings by arranging the assortment of assets pieces and textures. 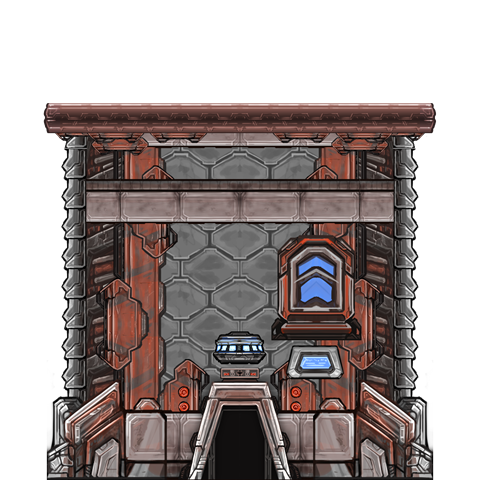 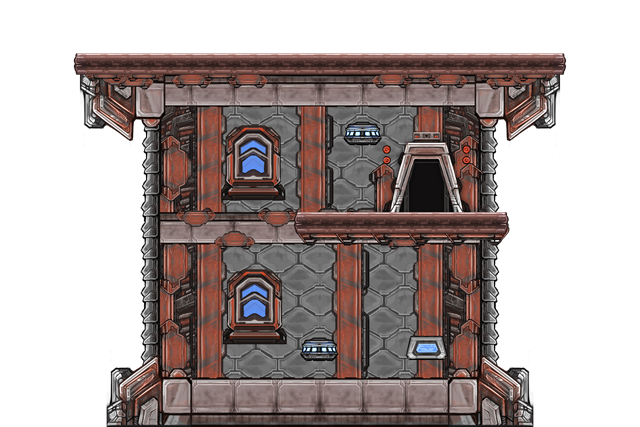 Josh was also hard at work trying out different concepts for the Titan Scrap, an old crash site littered with the remains of a metal giant, now turned into hill-side fortress and haunted by alloy-coveting undead.

We really like the player’s “grapple” and “boomerang,” so we decided to extend their capabilities a little bit and give the player more control over them. Presently, both abilities have their own dedicated button. For the boomerang, press it once to throw it out, and press it again to bring it back immediately, otherwise, it’ll return back to you on its own.

The grapple operates similarly – press the button once to throw it out, and press it again to pull back on the object (or enemy) it clamped on to. If you locked onto a grapple strip, hold on for the ride.

The boomerang can be recalled quicker in mid flight.

Chris was able to code the interpolated boomerang trails so that we can use it as the basis of other objects that may generate a trail effect.

Getting pulled towards a grapple strip.

When we mapped out Orion Wood in July, we placed some encounters with enhanced versions of the existing Rokknor units as a means to tell story and play with the pacing. Chris tackled the implementation of this, and it brought up some interesting issues centering on the question – should we lock the player into an area or allow her to be completely free to move around? Even though most of the game allows for complete freedom of movement, it seemed best in this case to restrict the encounter (like a regular boss encounter) and creatively solve what exactly is preventing the player from escaping.

Chris made several awesome convenience-related updates to our tools to make production a little faster and easier. He also added some game code, including an “Air Impulse” behavior, which allows for smoother movements for airborne entities and a “Jump on Head” transition, which allows entities to know the player has jumped on its head – perfect for squishing little bugs. Finally, he made some std::map allocations conditional to speed up the runtime, and he parameterized some player attributes for easy tweaking.

Goat created a song for treasure or puzzle rooms, currently entitled, “Mystery Room.” Sorry, no link to this song, but in case you’re not following goat’s blog, here’s one he recently shared, “Blade Hugger.”